The Problem With Manifestos

1. The Problem With Manifestos.

I’ve become more than a bit fascinated with manifestos…

You see them all over the internet.

Many are beautiful. They share great and wonderful ideals. Thoughts we nod along with and say “hell yes” to.

Some even get passed around. A lot. Accumulating tons of views and word-of-mouth.

And, then, as all too often happens, people just move on.

The social currency of having found something inspirational evaporates as the shiny-and-newness of it goes away. And eyeballs rapidly flitter off to the next cool content blip in an attention-addled, socially-streamed-life.

No movement is started.

No business or brand is launched.

No book or documentary is birthed.

No community gets built that truly sustains and matters beyond a momentary, yet passing glimmer along the distracted road to hope.

I look at all these scenarios and, I’ve got to confess, it bugs me.

Sure, it’s great to create something that gives people a moment of elevation. In a world that lives more in Teddy Roosevelt’s “gray twilight” than Maya Angelou’s “still, I rise,” there’s value in that.

But, what about the massive opportunity that gets left on the table?

The fumbled chance to transmute awakening and attention into action beyond a social share, and impact beyond the quick dopamine hit that comes from the realization that someone else sees the world the way you do.

Rare is the manifesto that leads to something bigger. To a community, the birth of a business, brand, book, movement or more.

And, there’s a reason…

Actually, there are many reasons. But, for our purposes, there’s one huge failure-point I want to explore.

One of the biggest reasons manifestos fail is because, with rare exception, those things we’re calling manifestos aren’t really manifestos.

What you see called manifestos all over the intertubes are actually “creeds,” or statements of values, beliefs and aspirations. A creed is all about putting a line in the sand, sharing truths and hopes we hold dear. It says “this is what matters,” and “this is what’s possible.”

To be sure, a creed is important. It provides a central set of beliefs to rally around. But, alone, it is, with very rare exception, woefully inept at mobilizing action beyond momentary ogling and sharing.

To move people from reading and sharing to gathering, supporting, investing, making and forming a genuine, outcome-driven communal endeavor, you need a way to tell a much bigger story and guide people to action in a much more defined way.

You need to create not just a creed, but a “true” manifesto, complete with all the ingredients needed to bake your connection, creation and contagion cake. To go from “I don’t know you exist” to “holy crap, how can I help?!” and then taking the first step along a path.

2. How to Craft a Manifesto That Actually Moves People to Action.

I’ve been writing manifestos for years, and deconstructing others for even longer. I’ve launched everything from books to brands to communities and what I call Businesses of Belonging around them.

I’ve tested a lot of ideas, written hundreds of thousands of words and learned a ton. What to do, and maybe even more important, what not to do.

One manifesto fueled thousands of pre-orders for a book and led my publisher to increase the opening print run 50%. Another launched an educational brand, live events and online trainings. Still others launched brick-and-mortar businesses with global communities.

Manifestos, I’ve learned, are not right for every endeavor. But, if they are a fit for what you’re working on, they can be a stunningly powerful way to both tell your story and move people to rise up and become a part of it.

So, if you’re “manifesto curious,” I’d love to share many of the big lessons I’ve learned…

On Tuesday, June 21st, I’m going to teach a free online masterclass on the critical elements of a manifesto. It’s called, “How to Tap Manifestos to Launch & Grow a Business or Brand at the Speed of Contagion.” I know, I know, not all that creative. But, at least you’ll know exactly what you’re getting. lol. 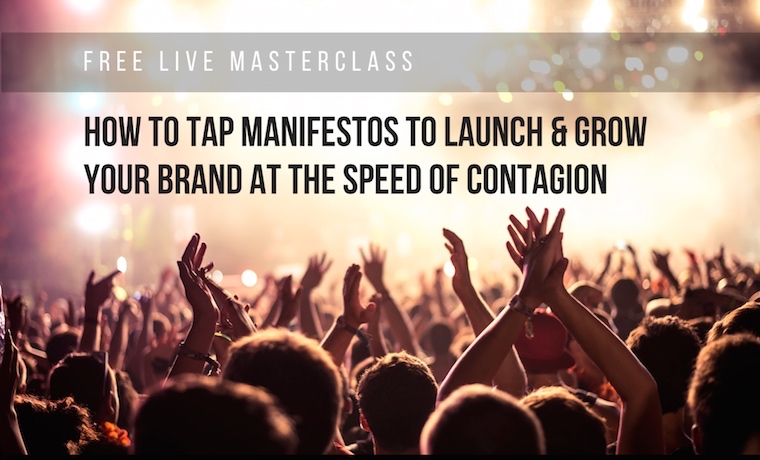 If you’re interested, you can learn more and grab your seat here now.

If it sounds cool, c’mon over and spend an hour or so with me on Tuesday, June 21st.

P.S. – As you’ve come to know about me, I’m pretty up-front with everything. So, yes, at the end of the free masterclass, I’m going to share a way to work together to create your manifesto. It’ll be completely your call. If you’d rather do it alone, that’s totally cool, there’ll still be a ton of standalone value for you in the free masterclass.